Today we’re going to take a quick look at Office for Android tablets. There are a total of three applications so we are going to glaze over all three of them.

First, the interface of Microsoft Word is actually very similar to the desktop version. The opening page, the tabs across the top of the editor and the save screen, all look like miniature replicas of the desktop version. This is great for those who are used to the desktop. There are three basic versions that you can have: if you don’t sign in to a Microsoft account you can only use this as a document viewer. Signing in let you create and edit documents. If you sign up for the office 365 subscription, you unlock some additional formatting features. In my experience the basic free version is good enough for most people. You still have most formatting along with the ability to insert images and other stuff to make documents look good. Performance was surprisingly good but that was only after some hiccups in the very beginning.

If you had the office 365 subscription you’re obviously going to have more stuff than everybody else but the basic formatting stuff is there. Overall it’s definitely cleaner than I expected, I found the templates are useful. This actually is a decent showing off by Microsoft so far. 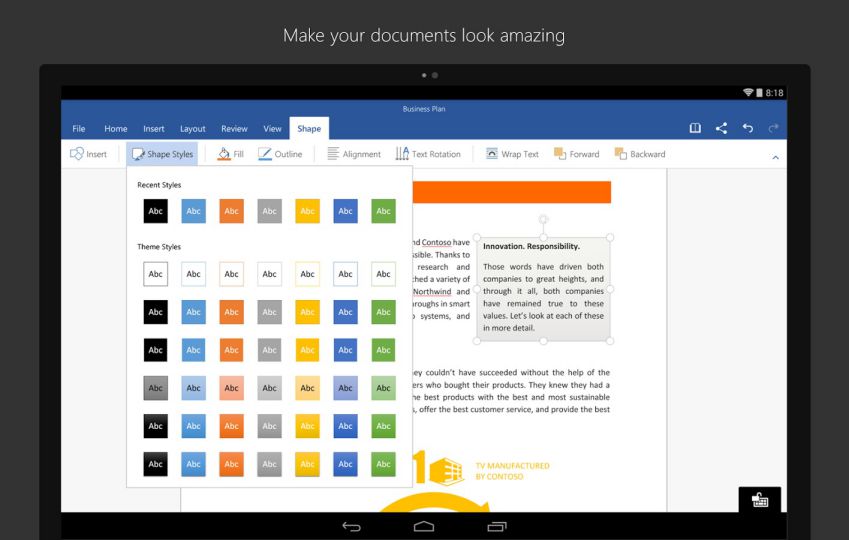 Excel is a lot like Word in terms of interface. It is essentially a mobile copy of their desktop app so fans will know their way around. Also like Word and PowerPoint office 365 subscription will get you more features and if you don’t sign in with a Microsoft account, you can only use this as a document viewer. I found the templates to be much more helpful here for starting out.The basic functions are hard to use but having a face to start from seem to be more useful in Excel than the other two.

The interface was easy to understand and including information never felt tedious or difficult. Much like word you have access to a lot of basic formatting in small stuff like inserting images. There are also algorithms built-in if you need them. The controls for spreadsheets are very spread out which I actually like because it made things easier to manage on a touch screen interface then if everything we’re all squeezed into one little area. Overall like word it was much better than I was expecting. 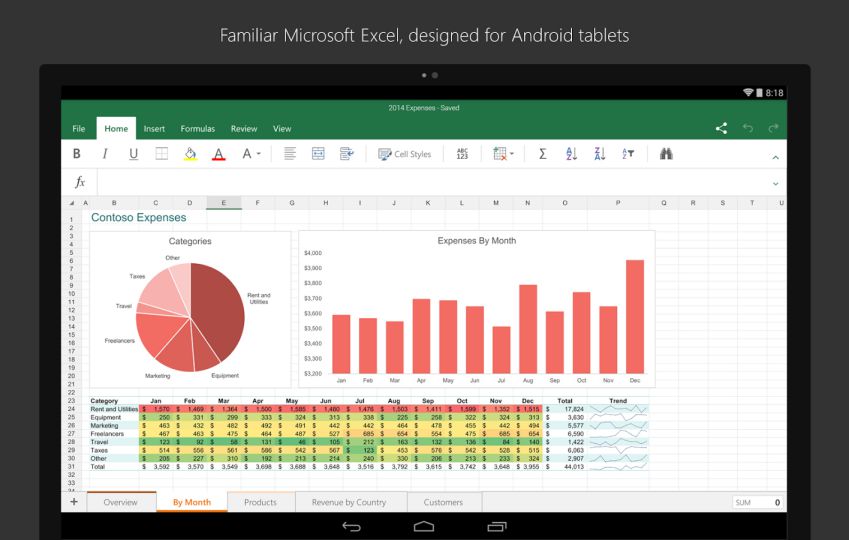 Last up is PowerPoint and pretty much all the same stuff applies here. You can view things out a Microsoft account but you do need one to edit stuff and office 365 subscription is required to get all the features. It is also pretty much a copy of the desktop version. To be perfectly honest I wasn’t expecting much in PowerPoint because presentation software has historically never been very good on Android much like the other two I was pleasantly surprised by the easy views and control I had over presentations.

Although I did have PowerPoint crash once when I tried to play a slideshow. But it is important to keep in mind these are early builds and are probably going to receive bug fixes and performance improvements as time goes. Overall it is PowerPoint and feels like a PowerPoint application. 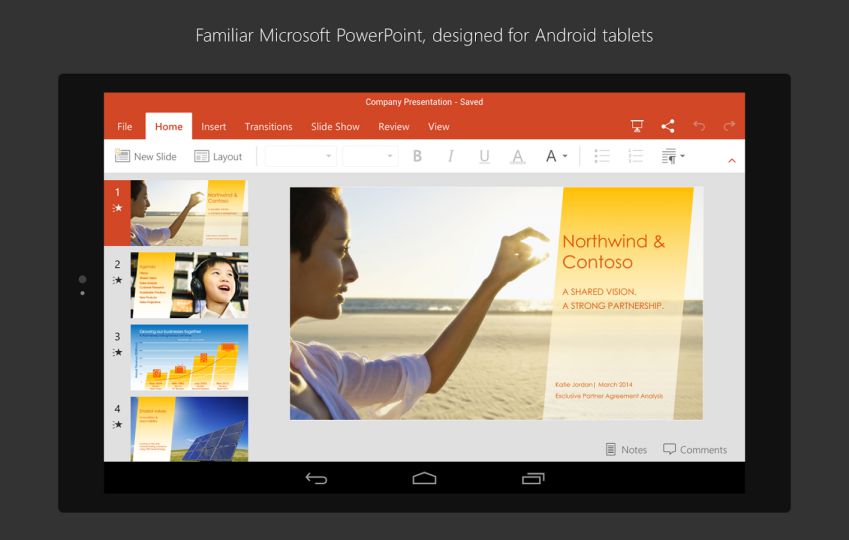 I was impressed with Microsoft office for Android Tablet. As long as you have Microsoft account and sign in with it, you’ll have access to about 90 percent of the functionality and more importantly the functionality that you’re probably actually going to use. Coolest thing about Microsoft Office for Android Tablet is not taking the cheap route in making all the important features locked up behind a paywall. After seeing how this works in comparing it to the mobile version, I can see now why Microsoft decided to wait to release this for tablets. The Office for Android Tablet version is beyond a shadow of a doubt and way more powerful than the phone versions and I think that’s what they were going for. That said, the worse app hiccups were when the apps first load up, they are a little bit sluggish until everything gets going and that may bother some people who are in a rush and like I mentioned a moment ago, PowerPoint did crash on me once.

There are those who may try to get angry about having to sell its way Microsoft account to use these applications. However, you may recall that you have to sign into google account to use pretty much any Google application and this is really no different. It is a bit inconvenient especially if you don’t have Microsoft account, but it’s not necessarily a bad thing. Overall this is a positive addition to the Google Play Store especially for those who use Microsoft Office, One Drive or otherwise married into the Microsoft ecosystem. It’s not for everyone obviously but Microsoft finally has a real in functional Microsoft Office for Android Tablet and I personally couldn’t be happier about it.

Love this post about Office for Android Tablets? Show your love by sharing it on your Social accounts and commenting below…

Want to join the discussion?
Feel free to contribute!

WooCommerce Vs Magento
Scroll to top

This site uses cookies. By continuing to browse the site, you are agreeing to our use of cookies.